Separating Signal from Noise: How Corporate Boards Are Making Sense of the New Administration

A few weeks into the Trump presidency, it is tempting to obsess about the political rhetoric and soundbites coming out of Washington, DC. While the first month of this new administration is certainly unprecedented in style, method, and message, the real cumulative impact on business remains unclear.

The combination of the chaotic start, the many political appointee vacancies across key departments and agencies, conflicting policy views between a Republican White House and Republican-controlled Congress on key issues, and ongoing investigations makes it challenging for businesses to respond and separate signal from noise.

Nevertheless, a recent pulse survey conducted by the National Association of Corporate Directors (NACD) offers some early insight into how companies and their boards are starting to navigate this new political environment. 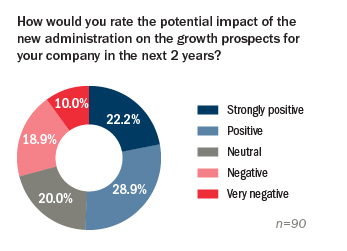 The differences in outlook are likely influenced by the relative dependence of individual companies on the benefits of international trade, the expected industry benefits of deregulation and infrastructure spending, and perceptions about the impact of a changing US leadership role in the global economy and security architecture.

2. Corporate tax reform, deregulation, and trade protectionism are the most highly ranked “policy” topics that respondents plan to discuss at their next board meeting.
That’s not surprising since the (gradual) effect of policy changes in these three areas can significantly alter cost and revenue 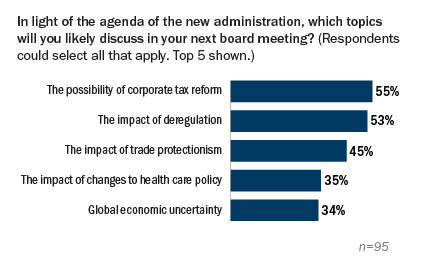 projections for business. The big question for many boards and executive teams will be whether the potential
fallout from trade protectionism (actions by the United States and possible retaliation by its trading partners) would offset any gains from a reduced tax and regulatory burden.

Trump’s unorthodox approach of injecting himself in the daily business of individual companies and their decisions seems to concern fewer respondents. Only 13 percent plan to discuss reputational exposure and management at their next board meeting.

3. Fifty-one percent of companies are now reassessing core assumptions about the impact of new and proposed policies on their strategic growth plans, which is an important exercise when so many key variables are moving or likely to move in the near future (for example, corporate tax rates, inflation, value of the dollar, interest rates, and import/export barriers). 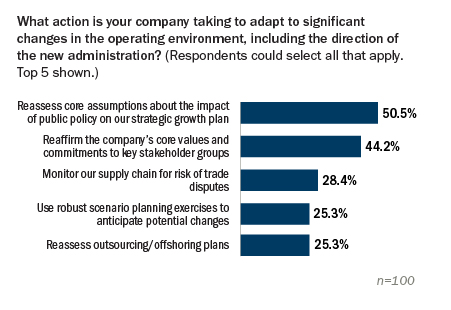 Also, in response to the speed and ferocity with which consumers in this very polarized environment now react to corporate actions, many business leaders are beginning to proactively communicate the authenticity of their brand and their company’s contributions to society. More than 44 percent of respondents report that their companies are now reaffirming their core values and commitments to key stakeholder groups.

4. Only 25 percent of respondents decided to introduce scenario planning exercises to adapt to changes in the operating environment. Of that group, 85 percent are considering discontinuous scenarios based on major swings in key economic indicators, while 76 percent are scenario planning different outcomes from the planned overhaul of the US corporate tax system. Other macro-issues, for which boards will use scenario-planning in the coming months, include the possible repeal of the Affordable Care Act, the commercial fallout of trade protectionism, and the impact of significant geopolitical crises.

If used effectively, these scenario exercises can help open the minds of decision-makers—corporate directors included—to different signals, and prepare for surprises that directly affect the business strategy. Leading companies actively monitor for such signposts that would trigger course corrections in their strategic pathway.

To help corporate directors sense and respond to changes in this operating environment, NACD continuously assesses and interprets the impact of emerging issues. Every week we post our most recent analyses in our Emerging Issues Resource Center. Stories are accessible to all members.

Thank you Friso. This was very helpful. It would also be terrific if you can periodically take the temperature of the boards re:Trump. A survey monthly would be helpful, so we can get a read on what is happening.