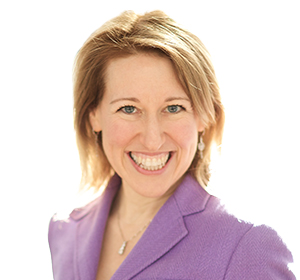 Editor’s note: This blog was originally published on August 20, 2019 and is being republished in light of the September 18, 2020 passing of Ruth Bader Ginsburg, former US Supreme Court associate justice.

Standing behind the lectern, her upper back engaged in its signature curve toward the floor, the eldest associate justice of the United States Supreme Court, Ruth Bader Ginsburg, spoke with a small, thin voice marked by the Brooklyn accent now made famous by last year’s duo of documentary and scripted films about her life—not to mention Kate McKinnon’s impression of her on Saturday Night Live.

The microphone’s arm, arching toward her face, ensured that those of us in the back rows of the court’s east conference room caught her comments, but not without the occasional need to lean physically forward and cup a hand behind one’s ear.

Crystal clear throughout the conversation, though, was the fact that neither Justice Ginsburg’s stature nor her vocal volume remotely represented the power of her words. The justice greeted the 175 members of the Washington Women’s Leadership Initiative constituting her audience this past July without missing a beat, and delivered remarks that allowed ample time for questions from the group of executives. The themes of the dialogue included four key areas: the importance of professional collegiality; the court, its former chief justices, and famous past cases; family and balance; and women and power.

With corporate directors’ current focus on innovation in an era of disruption, the justice’s remarks stand to remind us all—directors included—that disagreement, competing priorities, and inclusion are hallmarks of any governing or judicial body.

Justice Ginsburg shared a brief history of the high points of the lives and service of several former chief justices—all of them men—whose portraits adorned the walls of the room in which we sat. She shared the reasoning behind the gentlemen’s attire (plain, black, and without gold), noting the decided absence of a sense of royalty, and the ways in which these justices were responsible for ensuring that the US Constitution, as interpreted by the Supreme Court, supersedes acts of Congress where the two conflict (in contrast with the way most other countries operate). Guiding our eyes around the portraits, the associate justice made a remark that was at once both factual and wistful about the robed figures in the frames: “There might be a woman up there someday.”

Although the accomplishments and challenges of John Jay, our country’s first chief justice, and those of the men who followed in his chair were of interest to our audience, Justice Ginsburg’s comments touching on the personal and work-specific relationships in her life were the ones that especially seemed to capture the crowd’s attention.

Prompted by a question from the audience about family and work, Justice Ginsburg outlined what she considers a key factor in her professional success. Ginsburg began law school when her daughter was 14 months old. The toddler’s nanny arrived at eight o’clock in the morning each weekday, and Ginsburg would then head to class, returning at four o’clock in the afternoon. “Each part of my life was a respite from the other,” Justice Ginsburg explained. “I studied very hard, didn’t waste a minute, and when I got home, I went to the park with my daughter, played games, and sang silly songs.” When the baby went to sleep, the law student went back to the books.

“My biggest booster was my husband,” Ginsburg said. “Marty was secure in himself, and never regarded me as a threat. He made me feel I was better than I thought I was.” She explained that she did the lion’s share of the child care during the five years it took her husband to make partner at his law firm. After that, he took over for his wife on the domestic front.

The relationship with her husband was not the only interpersonal factor that has fueled success for Justice Ginsburg. She noted one longstanding custom among US Supreme Court justices which particularly smacks of best practice for all sorts of deliberative bodies—corporate boards included: “Every time we meet to confer or hear arguments, we each go around and shake hands with each other. Collegiality is terribly important in this workplace. . . . We look each colleague in the eye, even if they’ve circulated a nasty dissent.” She added, “We respect the institution we serve more than one another’s egos.”

What a great lesson to bring back to our own boardrooms.

Thank you for this personal insight into RBG.
Sheldon