This is the first in a series of blogs that will help your board prepare for Proxy Season 2017.

Proxy Season 2017 will give voice to the usual variety of governance issues we cover in our resource center on preparation for proxy season, but this year shareholder resolutions are highly likely to take a turn towards social issues. 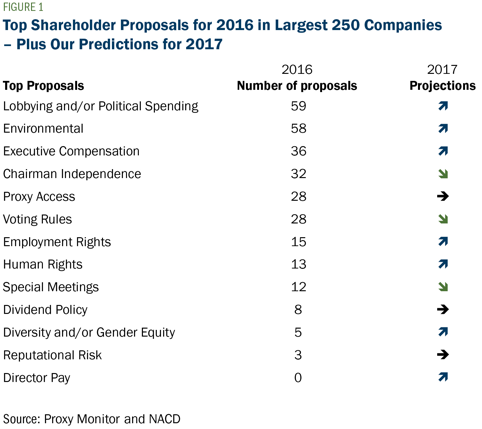 With an expected regulatory downshift under the incoming Trump Administration, standard-setting for business conduct may move from the government to the corporate sector, with shareholders and socially conscious directors driving the trend in myriad areas, from industry-specific concerns such as animal welfare to broader issues such as climate change. To be sure, we will continue to see proxy resolutions in the dozen general categories that have become hallmarks for activists, but the rise in attention to social issues by activists seems inevitable (See Figure 1).

Corporate leaders and major shareholders alike are recognizing the role that social issues can  play in corporate value. In 2016, corporate leaders and prominent investors issued “Commonsense Principles of Corporate Governance,” a collaborative document containing a key message: “Our future depends on…companies being managed effectively for long-term prosperity, which is why the governance of American companies is so important to every American.” Among their recommendations was the suggestion that boards pay attention to “material corporate responsibility matters” and “shareholder proposals and key shareholder concerns.”

As revealed in the NACD Resource Center on Board-Shareholder Engagement, proxy resolutions can play a role in raising board awareness of key issues. Although shareholder resolutions rarely win by a majority, and even then are only “precatory” (non-mandatory), they do raise boards’ awareness of issues and can spark change over time. Many of today’s governance practices began as failing proxy resolutions but ended up as majority practices, with or without proxy votes.

Take for example proxy bylaw amendments, which have only been fair game for proxy votes since spring 2012 (thanks to a new rule that removed director nominations from the list of topics disallowed for shareholder resolutions). That season saw only three proxy access resolutions at the largest 250 companies, and only one got a majority vote. Fast forward to spring 2016 when 28 companies had such votes, and nearly half succeeded in getting a majority vote. By December 2016, proxy access had been adopted by a majority of Fortune 500 companies, as Sidley Austin reports. Those early proxy access resolutions lost their early battles, but in the end, they won the larger war. The same could happen over time to social resolutions over the next four years.

Interestingly, directors seem to be intuiting that they will need to step up on social issues this year. The 2016-2017 NACD Public Company Governance Survey, which features responses from 631 directors surveyed in 2016, reveals a significant finding in this regard.  When asked to judge the ideal amount of time to be spent on various boardroom topics, directors ranked five topics as highest in terms of needing more discussion time:

One in three respondents said they would like more time devoted to discussing the “social responsibility” topic. For all issues other than these five, fewer than a third of respondents said that the topics merited more board attention. While this is a relatively new question, NACD has asked similar questions in the past, and this is the first time our respondents have ever ranked social issues so highly as a “need to know” topic.

A Gravitational Pull to Social Issues With a Strategic Slant

So what lies ahead for the next proxy season in the social domain? Aristotle is attributed with coining the phrase  “nature abhors a vacuum,” a theorem in physics aptly applied to the likely vacuum in new corporate rule-making in 2017. USA-first trade rules aside, we believe that shareholder activists may try to fill the break in Dodd-Frank rule making with their own social agendas.

As we go to press, attorney Scott Pruitt is slated to head his institutional nemesis, the Environmental Protection Agency, while Governor Rick Perry, former leader of oil-rich Texas, is in line to direct the Department of Energy. Neither man is likely to crack down on carbon-based fuels, so if shareholders want carbon reduction, they will need to redouble their own efforts—and indeed that seems to be the plan.

According to the environmental group Ceres, quoted in an overview by Alliance Advisors, LLC, U.S. public companies will face some 200 resolutions on climate change in 2017, up from a total 174 such resolutions during 2016. This prediction may be conservative. According to Proxy Monitor, in 2016 the 250 largest companies alone saw 58 environmental proposals—meaning that nearly one out of every four large companies faced one.

In other developments, As You Sow, a community of socially engaged investors, has already announced 46 of its own proxy resolutions, including three on executive pay. All the rest are on social issues, including climate change (11), coal (10), consumer packaging (5), and smaller numbers of resolutions in a variety of other social issues, including antibiotics and factory farms, genetically modified organisms, greenhouse gas, hydraulic fracturing, methane, nanomaterials, and pharmaceutical waste. The gist of many of these resolutions is to ask for more disclosure, including more information on the impact of current trends on the company’s strategy and reputation. For example, the “climate change” resolution in the Exxon Mobile proxy statement asks Exxon to issue a report “summarizing strategic options or scenarios for aligning its business operations with a low carbon economy.”

Similarly, the Interfaith Center on Corporate Responsibility has already announced the filing of five shareholder resolutions for the 2017 proxy of its longtime target Tyson Foods on a variety of issues, including one on the strategic implications of plant-based eating. Sponsored by Green Century Capital Management, the resolution seeks to learn what steps the company will take to address “risks to the business” from the “increased prevalence of plant-based eating.”

In the same vein, at Post Holdings, which holds its shareholder meeting January 28, a shareholder resolution from Calvert Investment Management asks for disclosure of “major potential risks and impacts, including those regarding brand reputation, customer relations, infrastructure and equipment, animal well-being, and regulatory compliance.” Note that animal welfare is only one factor here; Calvert is making a business case for the social change.

Visit our Preparation for Proxy Season Board Resource Center for more publications to equip your board for the season ahead.