Regardless of which party is in the White House, the National Association of Corporate Directors’ (NACD) more than 17,000 members will have a significant impact on both our economy and the country’s social fabric. The importance of strong corporate leadership was one of many topics discussed when the NACD Atlanta Chapter hosted a discussion about the Trump administration’s new world order.

Despite different party allegiances, six-term Vermont Governor Howard Dean and Republican strategist Ron Kaufman shared their optimism about the country and the global economy. Moderator Eric Tanenblatt led an informative and insightful discussion in which each panelist shared his perspective on topics relevant to business leaders. 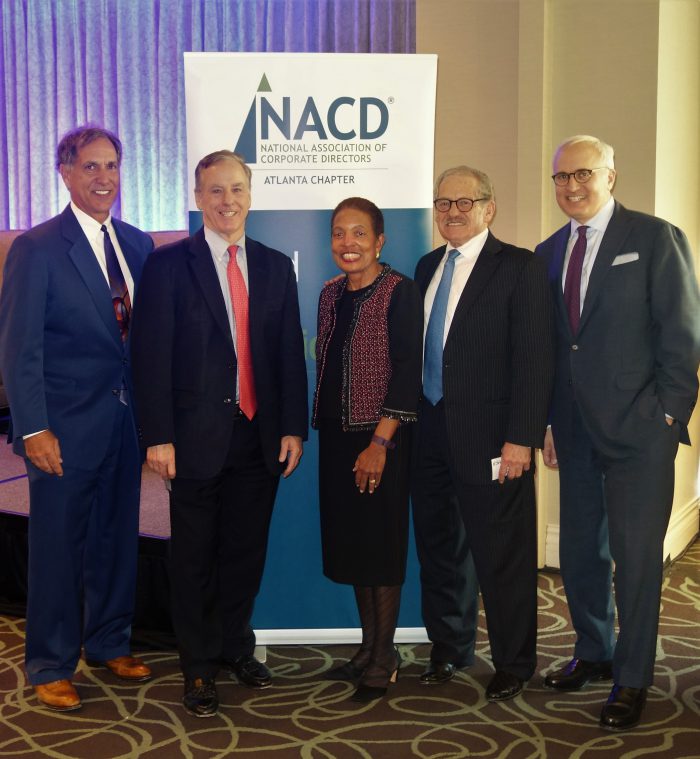 Governor Dean, former chairman of the Democratic National Committee and six term-governor, opined that despite some of the unpleasant overtones of the Trump campaign, President Trump’s victory can at a high level be attributed to discontent with the economy, and specifically to the impacts of automation and the Internet. The perception that jobs have been lost to overseas manufacturing is more likely due to workforce reductions resulting from automation. At the same time, the Internet has changed both how people receive information, and the quality of the information they receive.

As a result, many people voted for Trump because he represented change in a time when the “haves” and the “have nots” are at odds. A similar sentiment has been seen in England with the Brexit vote, and in current political tides elsewhere in Europe.

Mr. Kaufman, a senior advisor to US presidents, governors, and members of congress, concurred that the appetite for change was a significant factor in Trump’s election. He shared that during his work on behalf of candidate Jeb Bush and then candidate Trump, many of the voters he met were attempting to decide between Trump and Senator Bernie Sanders.

Despite both political parties having adopted anti-trade rhetoric, both panelists emphasized the ongoing importance of global trade. Dean noted that global trade has lifted billions out of poverty, and Kaufman added that in the new world order, the economy continues to be global. Misunderstanding this fact, he added, could be disastrous.

While both panelists were optimistic in general, Dean cautioned that the Trump administration’s foreign policy ultimately could have a significant impact on the domestic economy.

Given Congress’ intent to make sweeping changes to the Affordable Care Act, our panelists turned to healthcare. Both Dean and Kaufman agreed the issue is extremely complex and that buying insurance across state lines is trickier than it might seem. State insurance regulators would likely take steps to fight a system under which its citizens could buy policies from other states. States, Kaufman said, built programs based on their specific problems, like those Governor Mitt Romney addressed in Massachusetts. Other states have different challenges and concerns, which make a national plan difficult.

Dean suggested that the ACA could be modified, including the fee-for-service model, which is a major driver in the increasing cost of healthcare. He also suggested that the individual mandate should be repealed, given how much Americans dislike government mandates.

In speaking about the Democratic Party, Dean emphasized how important millennials are to the future of the party and the future of the country. This demographic doesn’t like institutions, and millennials know that they can take part in changing societal behavior using nothing more than a smart phone. Millennials also tend to be libertarian on fiscal issues and progressive on social issues. Young people are impatient for change and have the energy to make it happen. According to Dean, the Democratic Party should ensure its next leader resonates with this group.

Dean believes key issues the nation must address include:

Both speakers stressed the importance of education in terms of growing tomorrow’s workforce.

Kaufman believes that charter schools and vouchers can play an important role. Dean agreed on charter schools; however, he expressed concern about vouchers creating a more segregated society, where parents send their children to school with those of a similar background. Dean feels that such segregation would be problematic for the country in the long term. He shared that Republican school board members in rural areas are sometimes the biggest opponents to vouchers, as they would allow parents to move their children to larger school systems with more benefits.

Dean warned that student loan debt is a simmering issue that is impacting incentives in the workforce and could provoke a crisis in the years to come. He pointed to the fact that some communities are suffering from a physician shortage because many medical students are choosing specialties more lucrative than primary care in order to repay staggering student loan debt.

Kaufman suggested that, while we must change the education system, the answer may not lie in Washington, DC, and a variety of approaches may need to be deployed. In any case, he suggested that the older generation “should get out of the way and let the kids be in charge.”

This intelligent and respectful discussion of the issues came to an end with both speakers agreeing that America is an exceptionally strong country in which leadership—including the kind provided by American corporations—matters.

Note: The views and opinions expressed in this blog are those of the speakers at this event and do not necessarily reflect the views or opinions of NACD or the NACD Atlanta Chapter.

Kimberly Simpson is NACD’s regional director for the Southeast, providing strategic support to NACD chapters in the Capital Area, Atlanta, Florida, the Carolinas, and the Research Triangle. Simpson, a former general counsel, was a U.S. Marshall Memorial Fellow to Europe in 2005.