In Conversation with Janet Yellen

The second day of programming at the 2018 NACD Global Board Leaders’ Summit was capped with economist Willy Shih interviewing former Federal Reserve chair Janet Yellen. Yellen’s leadership has been credited as a primary factor in helping the United States to recover from the financial crisis of 2007–2008, and their conversation focused on the major trends currently shaping the American workforce, the future of our economy, and the ways in which US economic policy making shapes the financial health of the world at large.

Yellen sees economics as a discipline that is expressly concerned with human welfare, and in her view, new models of employment in the United States such as the gig economy can be a double-edged sword. “Reportedly, 35 percent of the labor force participates in the gig economy,” she noted. “Lots of people in that economy are full-time employees doing this on the side to earn extra money. And this is great because it’s flexible work over which people have a lot of control. On the other hand, there are a lot of people who are doing this who are reporting that they are not finding full-time jobs.” Another key problem is that these freelancers have insufficient access to benefits and to opportunities for professional development and advancement. 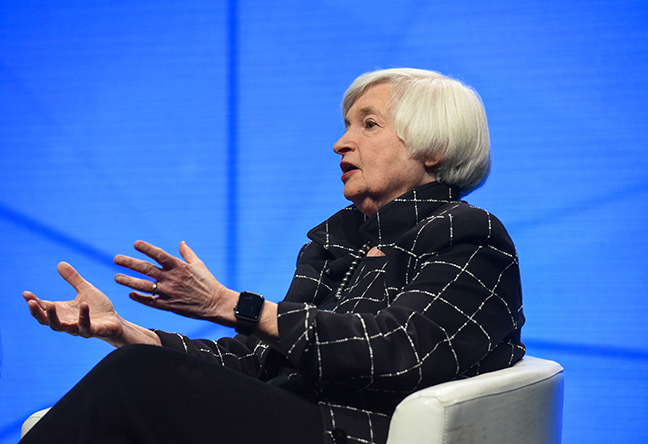 These dynamics stand to exacerbate the wage inequality problem that has been growing since the 1980s. Yellen attributed this in part to educational disparities, specifically in regard to workers learning how to adapt to new technologies that are reshaping the workplace and society as a whole. She also identified the slowing growth of productivity as another influence contributing to the decline of living standards for the average American. Productivity grew at a rate of about 2 percent per year after the end of World War II, but has gone down to an average of around 1 percent per year since the first decade of the new millennium. “You shouldn’t believe anyone who says there’s a silver bullet for this problem, but I focus on education and training as being the most important things,” Yellen said. “We haven’t been adequately equipping our workforce with the skills they need to succeed in this century.”

But the private sector can help in taming some of these issues. Yellen observed, “In other countries like Germany, many people don’t get a college education, but they are trained for successful careers. It is tough to hire people now, and now businesses are much more focused on training. Sometimes that involves private-public partnerships. Firms play a constructive role by explaining what’s needed and giving people a chance to complete training. Even for people who don’t lose jobs, lifelong learning is important, and tech is changing so rapidly that people need to upgrade their skills throughout their careers.”

Conversation then shifted to discussing the ways in which the global markets are closely intertwined, and how US economic policy can cause ripple effects through global markets—sometimes with unintended and undesired consequences. Yellen remarked that, during her time at the Federal Reserve, the consideration of global linkages in today’s hyper-connected marketplace was a standard part of the US central bank’s policy-making process. For example, even minor US interest rate increases could cause a flow of global capital to the United States and away from emerging markets. Those markets then experience downward pressure on the value of their currency and may see the cost of their dollar-denominated sovereign debt go up, further weakening their already fragile economies.

Yellen told the audience that unease about global spillover risk led the Federal Reserve to delay the first increase in the Federal funds rate in the fall of 2015 and, in 2016, to raise interest rates less than had originally been expected. This partly reflected weakening in the outlook in emerging markets and fears concerning the potential impact of higher rates on global growth. Reflecting on the current environment, she expressed concern about the destabilizing effects of US tariffs, especially on Turkey, a close American ally, which already is facing ballooning debt levels. Even more significant, in her eyes, will be the impact of US actions on the Chinese economy, which, like Turkey, already is facing mounting debt challenges. The combination of escalating US tariffs and tighter monetary policy could contribute to a weakening in the Chinese economy, which in turn could create financial risk contagion in global markets and spill over to the United States.

In closing, Yellen said that the fervor of the Trump administration in rolling back regulations intended to prevent financial crises is going too far. “The last ten years have been about putting in place a stronger system of financial regulation that would mitigate the odds of a future crisis. This has made our banking system much stronger and more resilient.” Weakening Dodd-Frank would limit the number of policy instruments the federal government could leverage to prevent the next breakdown of the financial system. That said, she agreed that regulations created problems for some companies that ought to be addressed. “I think regulations need to be tailored to be appropriate for the systemic footprint of an organization. The biggest banks should have the toughest requirements, but community banks were unnecessarily burdened.”

To read more on the theme of atypical risk and the interconnections between the drivers of those business risks, download The Report of the NACD Blue Ribbon Commission on Adaptive Governance: Board Oversight of Disruptive Risk.